This sheet is part of the WASS application. 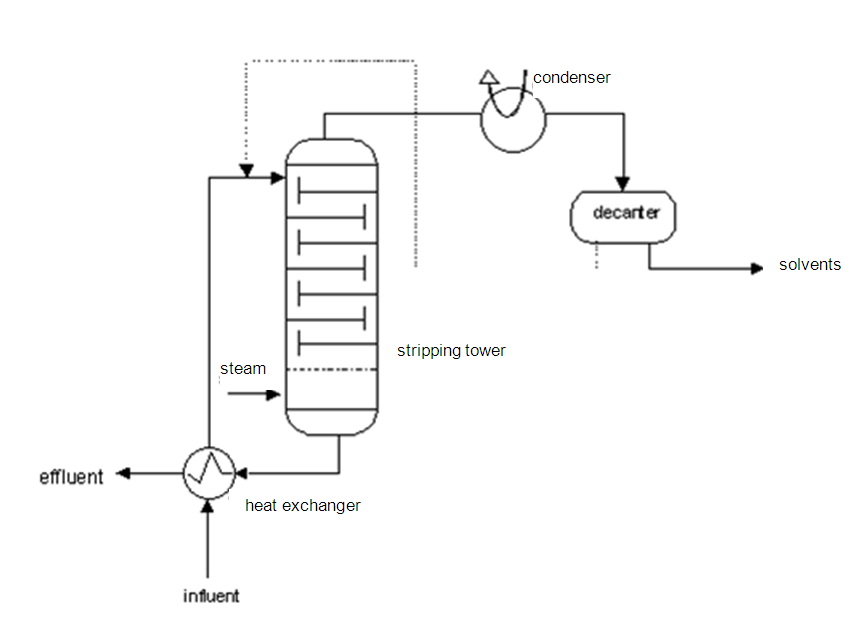 The principle is based on reducing the partial pressure of the pollution by heating and by creating a positive mass transport from the water to the gas phase via steam injection. A steam stripper consists of a supply pump with heat exchanger, a packed or dish column, a condenser with a separation drum and a reflux device, and a decanter. The wastewater must be free of solid matter, which could block the heat exchanger.

A stream stripper selectively removes components. Substances that dissolve well in water, which cannot be removed with the classic stripping method, can also be separated from water. Steam stripping consumes relatively large amounts of energy because electricity is used. Further, lime residue is also left behind, which could pollute the stripping tower.

Steam stripping is used in both inorganic and organic chemistry.

Steam stripping is implemented at temperatures between 90 and 120°C and pressures between 1 and 2 bar. The capacity of a steam stripper can vary from 1 to 100 m3/hour. The SM content must be <5 ppm.

The "stripability" of the compound is indicated by the Henry coefficient. In steam stripping for VOC, this coefficient is as follows: >10 to 100 ppmw[2].

Lime residue caused by shifts in the carbonate equilibrium must be prevented.

Steam stripping has a high removal yield. Here are a few examples of removal efficiencies:

Ammoniac can be stripped in a steam stripper. If ammoniac is interfering with other pollutants that need to be removed, this can be confirmed using neutralising substances.

Flue gases and condensed fluid are released as by-products. In most cases, these flows require further treatment.

No concrete data is available about the cost price of the purification technique itself. The cost of the measurement and regulation equipment, e.g. for the sludge level, can be estimated as follows:

The settings for the stripping process must be established with great accuracy. It is a relatively complex process to manage.

[1] Distillation is a technique using vaporisation to separate two or more substances in a solution, based on the difference in these substances’ boiling points.

[2] Parts Per Million by Weight