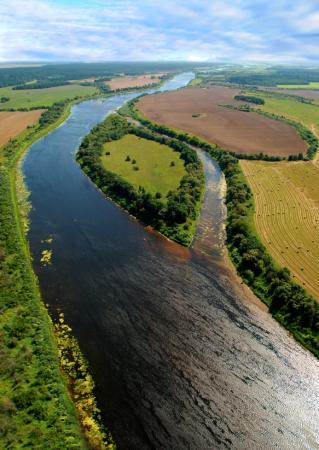 For centuries, we have polluted and altered European inland waterways to enable agriculture and urbanisation, produce energy, and protect against flooding. Rivers have been dammed and dikes and levees have been built to constrain the flow of water and better protect vulnerable land. These activities have, however, resulted in poor water quality and altered habitats, with significantly severe impacts on water ecosystems. Climate change will also have an impact, increasing water temperatures, and the chances of flooding, droughts and water scarcity.

In recent years, European countries have adopted measures to improve the situation. Public funds and improved European Union policies on water, agriculture, and climate change are the driving force behind more sustainable and lower investment ‘green-options’ to address the challenges posed by flooding. Using green infrastructure like floodplains and wetlands can often cost less than conventional infrastructure constructions, according to recent EEA reports, ‘Rivers and lakes in European cities: Past and future challenges,’ and 'Green infrastructure and flood management.’

Over the last few decades, European countries have made clear progress in reducing sewage and other waste emitted into lakes, rivers and other inland waters. An updated EEA indicator on urban waste water treatment shows that treatment in all parts of Europe continues to improve. The proportion of the population connected to waste water treatment plants in northern European countries has been above 80% since 1995, with more than 70% of urban waste water receiving tertiary, or a third round of treatment. This last round of treatment is used to remove nutrients. In central European countries, connection rates have increased since 1995 and are now at 97%, with about 75% receiving tertiary treatment. The proportion of the population connected to urban waste water treatment in southern, south-eastern and eastern Europe is generally lower than in other parts of Europe, but has increased over the last 10 years with levels now at about 70%.

The environmental health of Europe’s inland fresh water bodies and coastal marine areas are assessed by the EEA though regular reports and indicators (water and marine) which helps to underpin the European Union's Water Framework Directive. Recently published reports also include the annual bathing water quality report. The EEA will later this year publish the ‘State of Europe’s Water’ report, which will give an updated health check on the environmental pressures affecting the quality of Europe's groundwater, rivers, lakes and other water bodies. It is the first wide-reaching report on water since 2012. Water will also be the main theme of this year’s 'EEA Signals' publication.

More information on World Water Day can be found on UN Water pages.