Explore the world in a new way with IEA Energy Atlas 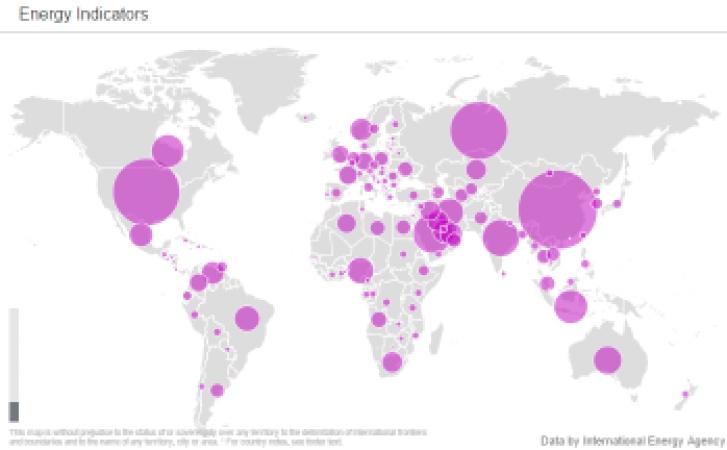 If an atlas is a window on the world, the new IEA Energy Atlas offers panoramas on every aspect of energy on a global basis and for 138 individual countries, with interactive maps and customisable charts that detail and compare a host of data based on the Agency’s authoritative statistics.

Available on the IEA website’s statistics area, the Energy Atlas provides its wealth of data in 40 varying map views across eight topics: electricity and four fuels – coal, natural gas, oil and renewables – as well as energy balances and indicators plus CO2 emissions from fuel combustion, all for every year from 1973 through 2012.

“Last year the IEA launched an animated Sankey flow representation of the evolution of the energy balance of countries over the last 40 years,” explained Jean-Yves Garnier, Head of the IEA Energy Data Centre, which produced the atlas. “We received a lot of compliments from policy makers, analysts and the public, but we also had many requests for more visualisation, including mapping of the world energy situation and the possibility of comparing countries. The Energy Atlas is an attempt to help everyone to better understand the complex world of energy.”

On the webpage for each of the eight topics, a world map graphically illustrates countries’ global proportion of consumption, output, etc., for five different data sets. For instance, purple circles show countries’ natural gas output in proportion to other nations (above), with the largest producers, the United States and Russia, represented by huge circles, but just small dots for smaller producers, like Japan at number 69.  Hovering over a purple circle displays the amount extracted in million tonnes of oil equivalent. But production is not the only data visible: click on the second of the five options, consumption, and green circles replace the purple ones (homepage photo), with Japan expanding to a large circle, as it is the fifth-largest consumer of the fuel.

Most of the fuels offer comparable data sets: production, consumption, share of the fuel used for electricity generation and for non-energy purposes as well as trade. The electricity map offers the share of all fossil fuels, nuclear or renewables in generation by country, as well as total generation and per capita consumption. The energy indicators map illustrates total energy production as well as energy self-sufficiency and intensity, while the map on the energy balance page can display total supply as well as consumption, both total and by sector. Emissions data depicted include CO2 per capita or per economic output, even adjusted for purchasing power parity.

Like all good atlases, the Energy Atlas also features maps for specific countries, augmented by country profiles with specific national data for dozens of key energy statistics, organised in descending order according to the nation’s rank in each category among the 138 indexed countries. Hyperlinks in each table shift to detailed text summaries of the information, and the map shifts to display data not just for the country but also its neighbours.

But the Energy Atlas is more than just maps. For instance, charts display all the data sets dating back to 1973, and users can add and subtract countries to compare their statistics: for instance, contrast the share of electricity generated by fossil fuels in Denmark, Germany, India and Japan since 1973.

Finally, each topic page features the cover of the IEA Energy Data Centre statistics publication that is the main source of the data; all of its information is available in paper, PDF, CD-ROM or online format, accessible by clicking on the image.

The Energy Atlas is the latest of a variety of new data visualisations on the IEA website. Besides the Sankey graphics, the Statistics section of the website features an interactive map of gas flows in Europe, and the IEA offers graphic representations of the data in each annual edition of its flagship technology publication Energy Technology Perspectives.