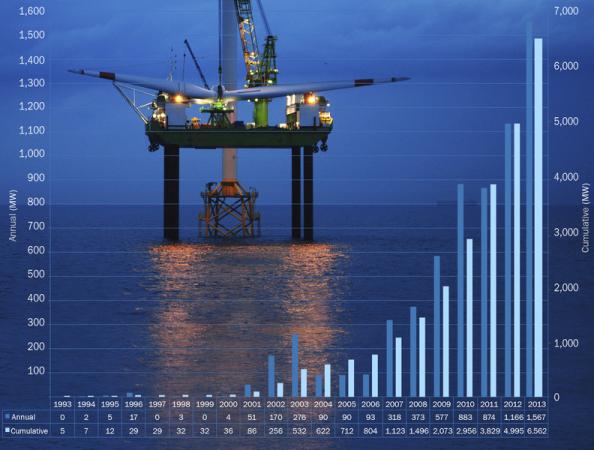 Giles Dickson, Chief Executive Officer of the European Wind Energy Association, said: "It's good to see the high level of investments in offshore wind in Europe in 2015. The 3GW of new capacity additions is also encouraging though it includes a large backlog of grid connections from 2014, especially in Germany.

Germany (2,282MW), the United Kingdom (556MW) and the Netherlands (180MW) were the three countries to grid-connect new offshore wind turbines in 2015 with 14 projects reaching completion. Work is ongoing on a further 6 projects in Germany, the UK and the Netherlands, which will contribute an additional 1.9GW in capacity.

With a net addition of 754 wind turbines fully grid connected in 2015, the average machine size rose to 4.2MW from 3.7MW a year earlier as manufacturers continue to develop larger models with higher energy capture.

Dickson said: "New capacity additions will be lower in 2016 than 2015 though should then rebound, and we can expect to have over 20GW offshore wind in Europe by 2020. The real question is what happens after 2020. The industry is making real progress in reducing costs. But we need Governments to give us a clear vision of the volumes they envisage long term and the regulatory framework they'll apply to drive the necessary investments. Active collaboration between governments is also key: to align their efforts to develop the sector in the North Sea and Baltic.